When you know the basics of HTML and know how to create a static HTML page you can start with implementing a server backend. The server backend is an application which generates the HTML page dynamically (on the fly) depending on some external input (usually user input and content stored in a database). For example, when you check your email on the web, the page you see contains your current emails (stored somewhere) and only those you want to see (e.g. in your inbox or another folder you have selected).

To create a dynamic page, you need another technology beyond HTML, this can be either:

In this part I will concentrate on the web server approach. I choose to use the PHP language for the server backend, this choice is rather arbitrary as it is not anyhow better or worse than using e.g. Python.

PHP is an interpreted programming language, which means that there is no compilation involved (or rather it’s done automatically behind the scenes). Practically this means that you just write the source code and it gets executed, which simplifies things a lot. PHP has a C-like syntax but otherwise it’s not anyhow similar to C. PHP is a fully fledged language which allows both procedural and object oriented programing. It has a large library of built in functions and extensions. A single file with the PHP code (and .php extensions) is called a PHP script. An application is composed of many scripts usually.

Before you start, you need to have a web server ready. Test that your setup is working by creating this PHP script file:

When you display the script in the web browser and everything works correctly, you should see something like this:

The above example is a simple PHP script, which does only one thing, it prints out (using the command echo) a string of characters <h1>Fant&#244;mas was here!</h1>. As you can see the script starts with the mark <?php which is required (there is also an end mark, which should not be used). Each PHP statement is terminated by a semicolon ;. Comments in the code are marked by // or #, and multi-line comments start with /* and end with */.

The main objective of a PHP application is to generate a HTML page, which gets sent to the web browser, which interprets it and shows the end-user a web page. In PHP the HTML language has no special meaning. For the PHP interpreter, the HTML language is just a string of characters as anything else.

You can see that in the first PHP script above – PHP does not really care what’s inside the string, it just prints it. In case PHP is being used as backend of a web application, this means that the text will get sent to a web browser (which expects it to be HTML).

When a string is quoted, it means it’s surrounded by quotes (either kind). The chosen quote character cannot be contained in the string itself or it must be escaped. Escaping means removing special meaning of a character (in this case the special meaning is terminate the string). Escaping is done by the backslash \ character. Some examples:

Variables contain values which can be changed (as opposed to constants). Variables begin with the dollar character $, should be safe names and case sensitive (not always, but sometimes yes – so, to simplify things let’s pretend that they always are).

You can do standard operations with C-like operators - +, -, *, /, =, ==. Additionally in PHP, there is a dot . operator which is used for concatenating strings. The operator = assigns a value to a variable, the operator == compares two values. The operator modulo is %. Examples:

increment the $count variable by one.

It is very useful to know some rules for converting values to the boolean data type (true/false):

Let’s have a look at some type conversion examples:

In the above example, we took advantage of the dynamic type system on the line echo "Greeting count: " . $count; where the variable $count is automatically converted to a string and concatenated with the string Greeting count: using a dot . operator. This is an example of how the dynamic types are useful as something like this is more complicated in C++ or Java.

With direct variable use, you can then simply rewrite the above example into:

Special characters e.g. \n for a new line and \t for a tab character, can be used to put whitespace into the string. So echo "Hi,\nJohn" would actually print:

So far we haven’t done much, because the script outputs only a plain text string. Outputting HTML is no different, it just gets more tangled.

In the above example, I intentionally mixed different types of quotes and concatenation methods. Normally you would write things in a more consistent matter.

Try to create a contact form like this using PHP echo command (review the HTML form elements if necessary):

Now define the number of columns and rows of the textarea element as PHP variables and output them for the browser.

Now define the page title and default textarea content as a variable too and set the default message to:

Also add a h1 header to the page with the same content as the page title. Hint: You’ll also need to use some HTML entities. 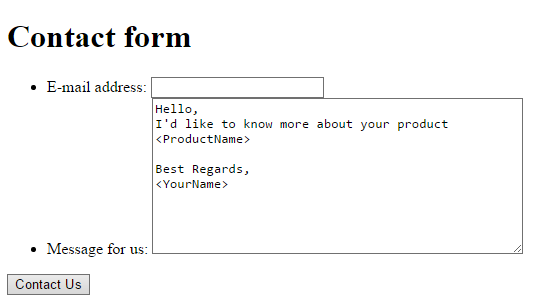 There are many different solutions to the above, so your solution does not have to look the same as my solution. Make sure to verify your solution using the HTML validator, and check that the message in the text area has the correct whitespace.

You can find yourself in a situation when you have two similar pages which share e.g. a common header and/or footer part. And now you are thinking about updating both of them – you have to open both PHP files and make same changes in the same part of the code. To avoid duplication of the code you can use the require command which finds the file by specified paths and “includes” it as if the source code of that included file was written instead of that command:

This is not the best example because the included file requires you to define a variable $pageTitle beforehand. But I wanted to demonstrate the behavior of the included source code. Usually the role is opposite – you include the file to use something from it. An important thing is that such a concept allows you to divide the logic and reuse your code. In the next chapters you will learn about functions and classes. With them it is more natural to use the require command to load libraries of reusable functions.

Now you should be able to create simple PHP scripts which output a HTML page. You should be familiar with PHP variables and know about the dynamic type system. You should be able to divide script into multiple files using require and avoid code duplications. Be sure to exercise different approaches to writing and concatenating strings, because all of them are widely used. Before continuing further, make sure you are not confused by the quotes all around the place.